The Story of Anuradhapura Book Preview 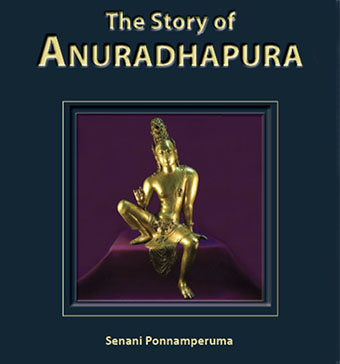 For nearly 1400 years, the Anuradhapura Kingdom flourished as one of the great civilizations of the ancient world. Its capital, resplendent with gleaming white dagobas—like massive spired globules, dotted the ancient cityscape. Adjacent to them were massive monasteries with tens of thousands of monks chanting mantras. Foreigners flocked to its shores to trade, and the people prospered. Then, in the space of just a few years, it was snuffed out, abandoned, engulfed by forest, and forgotten. What happened? Why did a civilization that had thrived for so long collapse so suddenly and vanish into the realms of folk memory?

The Story of Anuradhapura by Senani Ponnamperuma is a beautifully illustrated, easy to read book that presents the fascinating tale of the Anuradhapura Kingdom of ancient Sri Lanka. The author is a brilliant storyteller, who for the very first time has brought the story of this great civilisation alive. Using a crisp narrative style and numerous illustrations and photographs, he brings to light much new information and many previously unknown and overlooked facts.